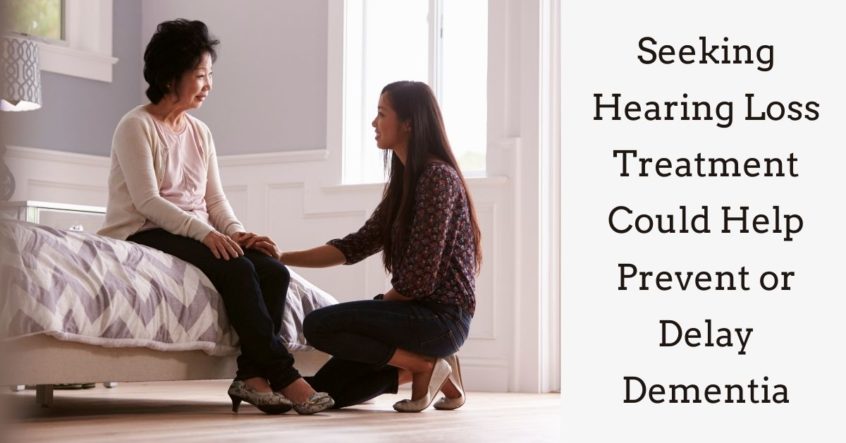 Nearly 50 million people, globally, live with dementia. Dementia is a group of medical conditions that reduce cognitive function: critical thinking, reasoning, memory, decision making etc. Types of dementia include Lewy body, Parkinson’s, and Huntington’s disease but the most common form of dementia is Alzheimer’s. Alzheimer’s accounts for 60-80% of the dementia that people experience. The number of people impacted by Alzheimer’s is projected to nearly triple, reaching 16 million, by 2050.

As hearing loss and dementia are expected to increase and impact more people, recent research has focused on the relationship and overlap of these conditions. Various studies show that the two are significantly correlated.

In a major study published in the Journal of the Alzheimer’s Association in 2019, researchers at Brigham and Women’s Hospital and Harvard Medical School explored the relationship between hearing loss and cognitive decline.

These significant statistics illustrate two key findings which are that hearing loss greatly increases the development of cognitive decline and that the degree of hearing loss (mild to severe) increases that risk.

Though continued research is needed to explicate how hearing loss contributes to cognitive decline, researchers have suggested a few theories:

It is incredibly important to be proactive about your hearing health which not only is a preventative measure but contributes to your wellness!

Addressing hearing loss is critical for the protection of your overall health. The first step is to schedule an appointment with a hearing healthcare specialist for a hearing test. Hearing tests involve a noninvasive and painless process that measures your hearing ability in both ears. This identifies any impairment, the degree, and specific type of hearing loss you may be experiencing. Fortunately, there are useful ways to treat hearing loss that result in an increased ability to hear. The most common treatment is hearing aids which are small, electronic devices designed to absorb and process sound.

There are numerous benefits of treating hearing loss including reducing your risk of developing medical conditions like dementia, enhancing communication, and improving relationships. This allows you to fully participate in all aspects of your daily life!