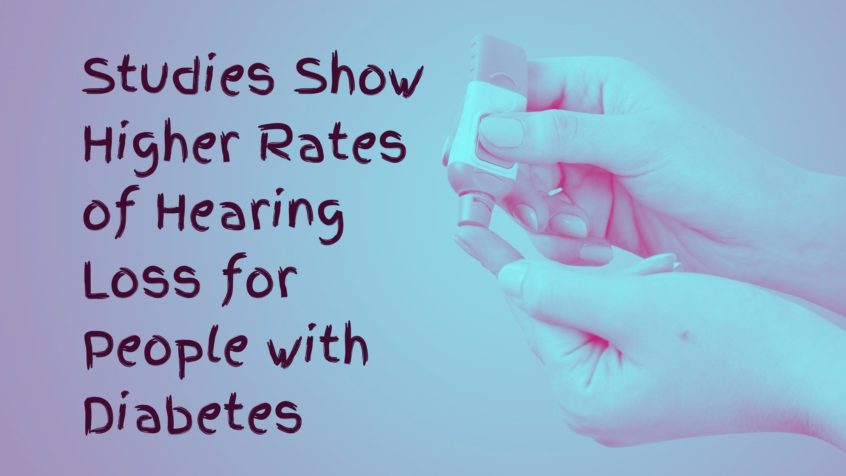 In the United States, diabetes affects 34.2 million people or one out of every ten people. Even more disturbing is the fact that one in every three Americans, or 88 million people, is prediabetic and may not even realize it!

Diabetes is a significant comorbidity that can harm your heart, nerves, feet, kidneys, and eyes, among other parts of your body. Researchers have discovered compelling evidence that diabetic people are twice as likely to experience hearing loss to make matters worse.

Hearing loss is a communication problem as well as an ear problem. When people fail to hear and respond to others regularly, it can lead to stress, anxiety, and even depression. Untreated hearing loss makes people less willing to attempt new things or reach out to others in their lives because communication becomes a source of stress and strain.

The frightening part is that when people are less social and less active due to hearing loss, their whole health suffers. Interactivity and lack of exercise are two of the most severe dangers associated with diabetes.

Diabetes is a disease in which the levels of blood glucose, commonly known as blood sugar, are high enough to prevent your cells from receiving oxygen-rich blood. Glucose is derived from the meals you consume.

Insulin is a hormone that regulates blood sugar levels so that glucose and other vital nutrients can easily reach your cells throughout your body.

Type 1 diabetes happens when your body does not create enough insulin, while type 2 diabetes develops when your body produces insufficiently absorbed insulin. Type 2 diabetes is the most common type of diabetes, affecting people of all ages and generally caused by a high-sugar diet combined with a lack of physical activity.

In the United States, 88 million people, or one in every three, are prediabetic, meaning their blood sugar levels are high enough to put them at risk of developing type 2 diabetes. This number has increased by 50% in the last decade.

The link between hearing loss and diabetes

A study published in the Annals of Internal Medicine by the US National Institutes of Health (NIH) in June 2008 found a significant link between the two illnesses. The researchers discovered that diabetic patients were considerably more likely to have hearing loss after evaluating the results of hearing tests across working-age adults of various income categories and professions and comparing them to cases of diabetes.

A comparable 2011 study from the Tsukuba University Hospital Mito Medical Center in Ibaraki, Japan, analyzed 13 other studies on the topic, including around 8000 patients with hearing loss and nearly 23,000 people who did not have hearing loss. According to the study, hearing loss is more than twice as common in diabetics as it is in non-diabetics. One thousand people with hearing problems had diabetes, compared to 2500 people without diabetes, resulting in a 2.3-fold increase in the likelihood of having diabetes.

What causes hearing loss in people with diabetes?

When the body’s nerves and cells cannot absorb critical glucose and nutrients due to a lack of glucose, diabetes can result in nerve and cell damage. Our hearing is based on microscopic hair-like cells in the inner ear. These hairs send sound waves to the brain in the form of electrical pulses, which the brain interprets, and they rely on a steady supply of oxygenated blood to be alive. When these cells are damaged due to diabetes, it can affect your ability to hear permanently.

How to protect your hearing

Understanding ways to lower your diabetes risk can also help you safeguard your hearing. Avoid processed sugars and foods and eat a healthy balanced diet rich in veggies and low-fat proteins. It’s also crucial to be active and increase your heart rate for at least 30 minutes per day. If you feel you have a hearing loss, you may have diabetes as well. It’s a good idea to keep track of both of these issues.

Make an appointment to get your hearing checked and to have your diabetes evaluated regularly. The more we grasp how our complete health is interconnected, the easier it will be to maintain our overall health. Make an appointment for a hearing test now!