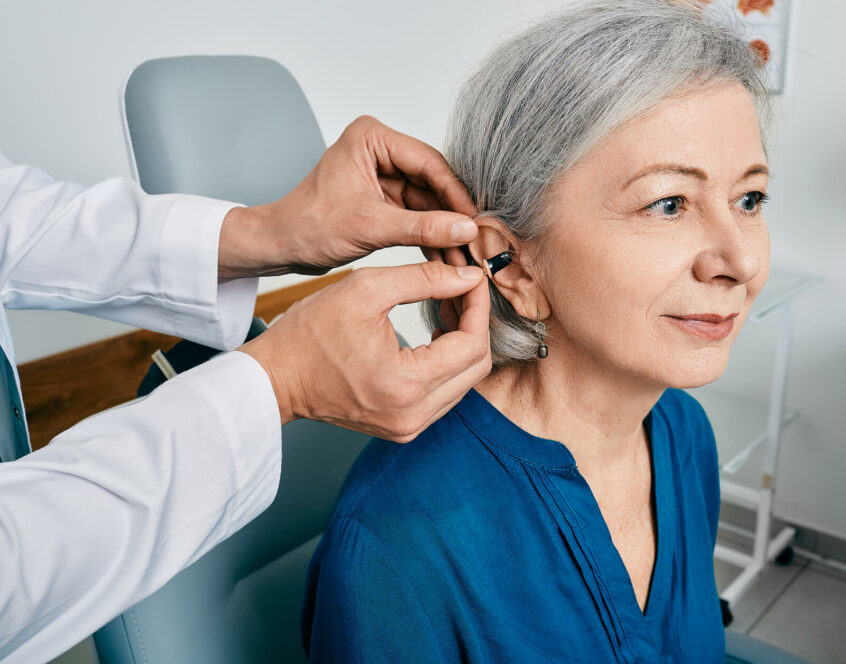 As the holidays approach, you may find that your to-do list is growing. But what if you added on an item that was in service of doing something just for yourself? This November, schedule a hearing exam in honor of American Diabetes Month.

Diabetes in the United States

One in ten Americans live with diabetes. More than one in three people, however, are considered prediabetic, which means that their blood sugar levels are cause for concern. Each year, between five and ten percent of prediabetic people cross over into a diabetes diagnosis.

In the mid-nineteen seventies, concerned experts saw the upward trend of diabetes in this country and began holding a National Diabetes Month in order to bring awareness and education to the problem. Today, we recognize November as American Diabetes Month, a continuation of that original campaign and an opportunity for people to share resources for diagnosing, preventing and living with diabetes.

Essentially, diabetes is a condition that affects the way the body metabolizes energy. In a healthy system, consumed food is broken down into foundational building blocks in order for cells to receive necessary energy. Sugars, or glucose, are released into the bloodstream which alerts the pancreas to send insulin. Cells need insulin to effectively deliver glucose to cells, which is then used as energy.

People with diabetes do not have such a straightforward path between digestion and the delivery of glucose to cells. Instead, they either do not produce enough insulin or the body is unable to effectively process insulin. In both cases, the body has trouble both transporting energy appropriately to the cells that need it and additionally, the body struggles to regulate blood sugar levels.

When the body cannot regulate its own blood sugar levels, spikes and drops happen. This environment is toxic to cells, which causes a breakdown in healthy tissues. Many people with diabetes closely monitor their eyesight, kidneys and limbs for evidence that the cells are declining.

But this also impacts hearing health. According to a new study, diabetes patients are twice as likely to experience hearing loss than non-diabetics.

When we talk about cells needing a healthy environment to thrive and do their intended jobs, this pertains to inner ear cells, as well. The inner ear is home to stereocilia, tiny cells that are integral to the hearing process. They collect noise from the environment and transmute it into sound information in the form of electrical signals. These signals are sent to the brain via the auditory nerve. In the brain’s processing centers, sound information is turned into what we perceive as hearing.

These cells are vulnerable to harm, from excessive noise exposure to the natural aging process. They’re also in danger when circulation is compromised or blood sugar levels become toxic. When they deteriorate, they do not repair themselves or produce new ones. Instead, we simply have less stereocilia to work with. The full spectrum of sound is no longer available to us and we tend to lose certain frequencies of sound as the number of healthy cells decline.

This is of course, the working theory of many experts and more study is needed in order to more fully understand the significant link between diabetes and hearing loss.

How to prevent hearing loss due to diabetes

One of the best ways to avoid harming hearing health as a result of diabetes is to implement disease management tactics that can decrease the severity of diabetes. Using proven methods of adjusting diet and implementing activity into your lifestyle can help to successfully mitigate the more destructive qualities of the condition. Paying close attention to blood sugar levels and medicating with the therapies recommended by your physician can also help to avoid the spikes and drops in blood sugar levels that prove toxic to cells and tissues.

If you have trouble with speech clarity or understanding what people around you are saying, it’s recommended that you schedule a hearing consultation. In addition to managing diabetes, intervening in hearing health decline can profoundly improve your quality of life. Our team of highly trained professionals can lead you through a quick and simple hearing exam and get you started on a path to your healthiest hearing.