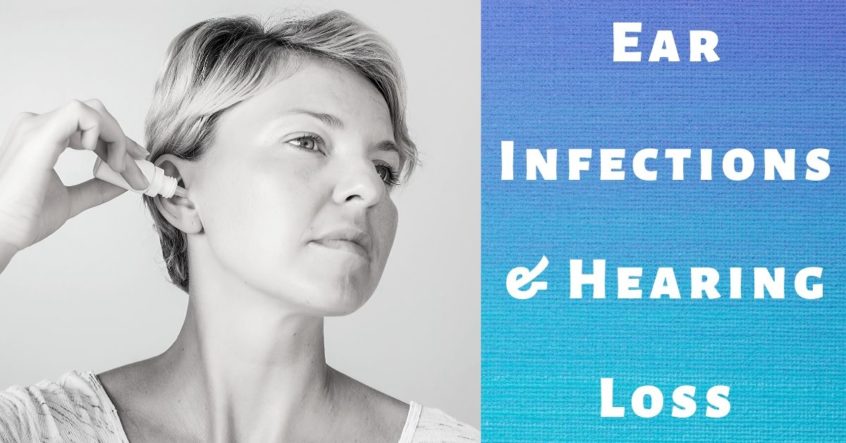 People often attribute hearing loss to several factors such as aging, injury and heredity; but what usually doesn’t cross their minds is infection. Ear infections can very much reduce the hearing ability in patients either temporarily or permanently. This type of hearing issue is referred to as a conductive hearing loss. Here, we take a look at the correlation between ear infections and hearing loss.

Conductive hearing loss typically refers to a blockage or obstruction within the external part of the ear which inhibits the ability of soundwaves to be transferred to the inner part of the ear. Infections can cause blockages by building up fluid and obstructing the functions of the outer and inner ear.

The basic anatomy of an ear is characterized by three parts. The outer, middle and the inner ear. The outer portion of the ear is comprised of the following parts: the pinna, the auditory canal and the ear drum. The function of the outer ear is to collect and channel sounds to the other part of ear to process them.

The middle ear consists of three structures, the three small bones: the hammer, anvil, and stirrup, the oval and round window and the Eustachian tube. The middle ear is mainly known as an air-filled capacity that causes the sound waves to vibrate. It connects the outer and the inner ear by transmitting sounds between them.

The inner ear can practically be viewed as a set of two organs: the semicircular canals and the cochlea. Together the two organs manage converting sound waves into electrical impulses and passing them onto the brain.

When sounds fail to pass through the outer ear to the middle ear, it is called a conductive loss. The ability to conduct sound is reduced with this condition. It may as well be diminished altogether if the condition persists for long. Obstructions in the ear canal can exist in the form of something as minor as an ear wax or as complicated as a cyst or a tumor.

Otitis externa causes redness and swelling of the outer ear canal. This condition is also referred to as “swimmer’s ear” as exposure to water tends to worsen it and makes it more susceptible to inflammation. The buildup in the ear canal blocks sounds from being transmitted to the inner ear.

Otitis media refers to inflammatory diseases that affect the middle portion of the ear. Acute otitis media (AOM) and otitis media with effusion (OME) are the two main types of infections. In the former, the infection progresses rapidly and appears in the form of ear pain. The latter presents no symptoms except an occasional feeling of fullness in the ear. Bacteria and viruses may be the primary causes of these conditions. AOM and OME can possibly result in a temporary audibility loss. Untreated hearing loss can also cause permanent damage to the ear structure.

There are quite a few factors that can contribute to conductive hearing problems:

The symptoms associated with ear infections are similar to that of other types of audibility issues and therefore require a visit to the doctor to diagnose the underlying cause. However, common symptoms include:

When to Seek Doctor’s Attention

An ear infection shouldn’t be allowed to persist; this can severe the chances of a proper recovery. Getting diagnosed for ear problems is fairly easy. Primary physicians can detect problems by running simple examinations of the ears, throat and nasal passages. This is usually performed using an otoscope, which helps doctors detect the amount of fluid buildup in the eardrum. Depending on the severity of symptoms, doctors can perform further tests and determine the right course of treatment.

How Infections and Hearing Problems Are Related

An ear infection is usually accompanied by symptoms that result from blockage. The infection causes obstructions to form behind the eardrum which prevents sounds from passing through to the inner ear. When no or reduced sound is transmitted, hearing becomes an issue. Untreated hearing loss can only deteriorate the problem further. Patients should consult their primary caretakers immediately if they experience any such symptoms.

If you’ve noticed changes in your hearing due to ear infection and are struggling with communication, contact us today. We provide comprehensive hearing health services and we’re here to help!