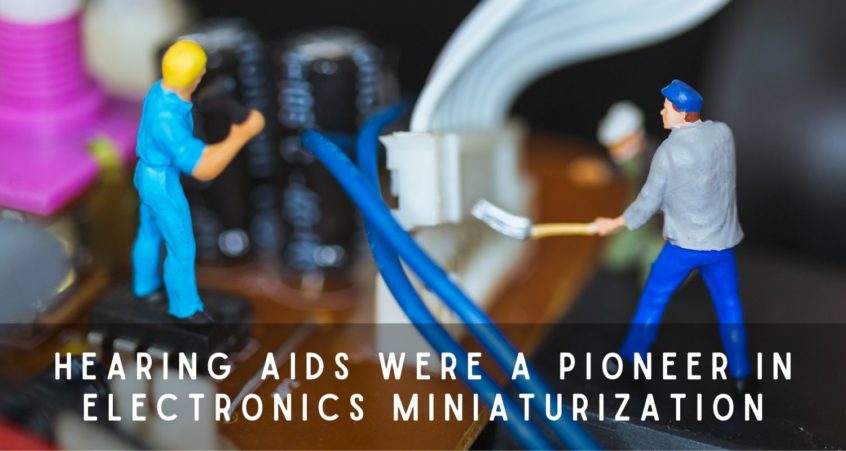 Today electronics are becoming smaller and smaller. While tiny computers in our phones and watches are commonplace, this is a relatively new development in technology. Even thirty years ago, it would have been unheard of to consider palm-held computers as being nearly everywhere! Not only are computers smaller than ever, but more precise and faster. How did electronics designers and manufacturers develop technology, so small and so powerful? It was just 1977 when inventors at MIT built a single tablet that filled an entire room. While it was enormous, it was very similar to modern smartphones and tablets. We’ve come a long way in just a short time. Much of this innovation is in fact due to the need for militarization in hearing aid technology.

The Need for Miniaturization in Hearing Aids

Most people 40 years ago could even imagine a tiny computer in the context of sci-fi movies and stories. However, for hearing aid users, they required smaller hearing aids that could fit around or in the ear canal to enhance hearing. The option for a giant cumbersome computer to enhance hearing was barely an option. Hearing aids also required battery power at a time when other electronics were not always powered by such small energy cells. Let’s look back to some crucial moments in the history of hearing aids that made small electronics possible today.

Hearing Aids Prior to Miniaturization

According to sound scholar and historian of amplification technology, Mara Mills at New York University, it was technology advancements during WWII which allowed for the miniaturization of hearing aids. Needs for radios to transmit at far distances during the war led to the development of smaller audio technology. Prior to this, stigmatization of hearing loss is believed to be a major barrier in the development of technology that could properly amplify sound. Instead, crude conspicuous instruments such as hearing trumpets were used. Mills believes that the stigmatization simultaneously may also be the reason which ultimately inspired smaller devices for hearing.

The transistor is considered one of the basic building blocks of modern electronics.

Prior to transistors, electronics were reliant on high-voltage circuits which allowed them to only output as much voltage as they received on input. In 1947 John Bardeen and Walter Brattain at AT&T’s Bell Labs in Murray Hill, New Jersey researched and experimented with conductors which allowed for an output voltage that was greater than the input voltage. However, it was physicist William Shockley, who saw potential in this technology and used it to develop what he called “transresistance”. This allowed for a smaller voltage to become amplified at a greater force, allowing for more power in a smaller package. This in effect was what hearing aid designers were waiting for to be able to make hearing aids more compact and discrete.

Compact Assembly and the Integrated Circuit

With the innovation of the transistor, hearing aids became smaller, but it took many years before the entire assembly of the microphone, receiver, and speaker were small enough to fit into the outer ear. It was deaf and hearing-impaired advocates which pushed for smaller devices that allowed hearing impaired some reprieve from the ableist eye of the hearing world. To fit the entire assembly of the hearing aid to fit in one small package it required hearing technology which was even smaller. This came in the form of an integrated circuit. An integrated circuit is a set of electronic circuits on one small flat piece of semiconductor material.

Now widely used today it was the need for more power in a smaller form of hearing aids that premiered this technology. With innovations in integrated circuits, microprocessors were developed. Microprocessors are formed from integrated circuits and contain the arithmetic, logic, and control circuitry required to perform the functions of a computer’s central. Between 1959 through the 1970s, microprocessors were able to manipulate sound to make it easier and more accessible to hear in hearing aids.

Today, with innovations in digital hearing aids, we can now offer hearing aids small and discrete enough to fit within the ear canal. If you desire hearing enhancement but you aren’t ready to share it with the world there are options available for you. Contact us to find out more about hearing aid technology and all it can do for you.