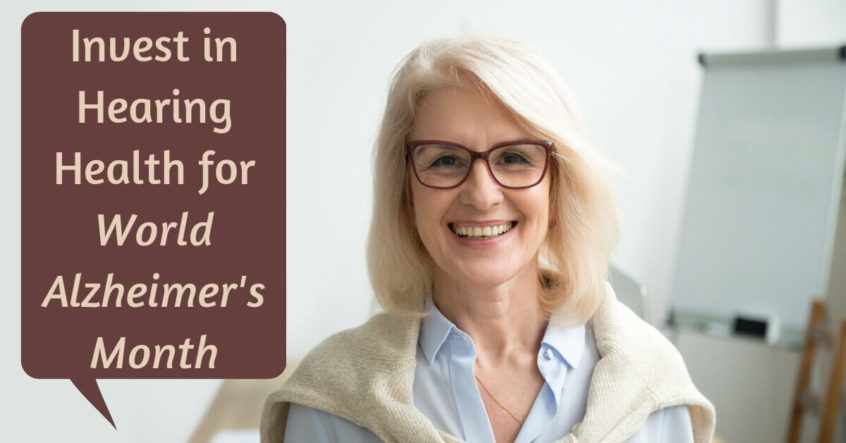 This month, September, is World Alzheimer’s Month. The organization, Alzheimer’s Disease International, uses this month to raise awareness on the prevalent condition worldwide.

At Hearing Aid Associates, we would like to participate in raising awareness for dementia and Alzheimer’s disease by connecting these conditions to hearing loss.

While there is no current cure for Alzheimer’s disease, treatments are available. One major goal of researchers and organizations working on Alzheimer’s disease is to raise awareness and to find better ways to treat the disease and delay its onset.

The Link between Hearing Loss and Dementia

How are hearing loss and dementia and Alzheimer’s disease connected? The answer can be found in the brain.

Sensorineural hearing loss occurs due to the natural process of aging (presbycusis) or exposure to loud noise, and it affects inner ear hair cells which are responsible for translating sound vibrations into neural signals. With hearing loss, these signals become incomplete and therefore, sounds may appear muffled or difficult to decipher. As these incomplete signals are making their way to our brains, our cognitive abilities must work in overdrive to piece the signals together.

A number of studies have explored the effect of untreated hearing loss on our brains. In a 2012 study in Aging Health, Arthur Wingfield and Jonathan Peelle looked at the effects of hearing loss on the brain, the “hidden effects of hearing loss that may have significant consequences for both cognitive function and neural integrity.” They found “that successful perception of speech that is degraded by hearing loss can draw cognitive resources that might otherwise be available for encoding what has been heard in memory” and that “even a mild to moderate hearing loss can inflate the appearance of cognitive decline in the older adult – a cautionary note for the geriatric clinician/diagnostician and family members alike.”

A 2015 study from the University of Colorado found that “the portion of the brain devoted to hearing can become re-organized – reassigned to other functions – even with early-stage hearing loss, and may play a role in cognitive decline.” According to Anu Sharma from University of Colorado’s Department of Speech, Language and Hearing Science, “The hearing areas of the brain shrink in age-related hearing loss. Centers of the brain that are typically used for higher-level decision-making are then activated in just hearing sounds…these compensatory changes increase the overall load on the brains of aging adults…Compensatory brain reorganization secondary to hearing loss may also be a factor in explaining recent reports in the literature that show age-related hearing loss is significantly correlated with dementia.”

Studies from Johns Hopkins University have also contributed a major body of knowledge on the correlation between untreated hearing loss and dementia.  In one study, Dr. Frank Link and his team tracked 2,000 older adults with the average age of 77 for six years. They found that 24% of test subjects were more likely to have diminished cognitive decline compared with subjects with normal hearing. In another set of studies, Dr. Lin and his team tested 639 subjects over 12 to 18 years and found that people with moderate hearing loss at the start of the study had three times the risk of developing dementia than people with normal hearing. Researchers noted that people who treated their hearing loss with the use of hearing aids showed less risk for developing dementia.

Invest in Your Hearing Health

Treating hearing loss with hearing aids is one of the best ways to support your cognitive function, which in turn could help reduce the risk for developing dementia. A simple, quick hearing test is all it takes! If a hearing loss is detected, our team at Hearing Aid Associates will work with you to find the best solution to meet your hearing needs.

In honor of World Alzheimer’s Month, contact us at Hearing Aid Associates for a hearing test and invest in your hearing health!