There are three distinct types of hearing loss and four classifications, which indicate the severity of the loss. Hearing loss is caused by any one of numerous conditions, which are discussed hereafter. Though this page presents many common problems, it does not attempt to explain every possibility. Difficulties in hearing can be a result of problems in any of the three sections of the ear. 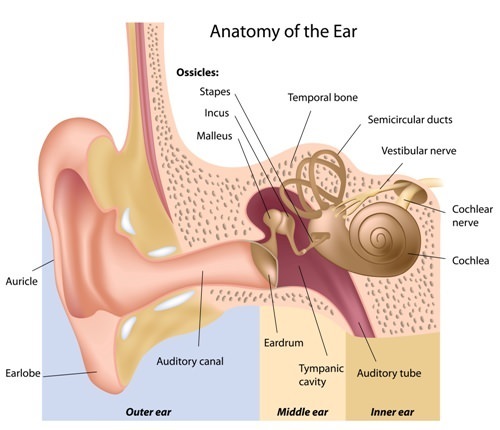 Infection – Causes irritation, swelling and pain but usually does not cause any hearing loss unless untreated.

Impacted earwax (cerumen) – earwax can build up and clog the ear canal, blocking the entry of sound into the inner ear. A visit to the doctor’s office to remove the earwax can provide relief.

Retraction of the eardrum – Abnormal pressure in the ear can cause the tympanic membrane to tense up or retract, restricting its motion thus limiting the vibrations that reach the inner ear, causing a mild hearing loss.

Perforation of the eardrum – A hole in the eardrum caused by any number of factors. Performance of the eardrum depends on where and how big the hole is. Some require surgery to repair but many heal themselves.

Effusion – After a long period without equalizing pressure in the middel ear, mucus can build up in the ear.

Otosclerosis – causes stiffening of the ossicular chain and decreases the effiency of the conductive mechanism.

Presbycusis – Deterioration of the hair cells in the inner ear due to aging. It is the most common ailment of the inner ear.

Noise Induced Loss – An increasingly common cause of hearing loss. Over-stimulation of hair cells by intense sounds damages them, most commonly in the high frequencies. When a large number of hair cells from a particular region are lost, a hearing loss is created in that region.

Tumors – Though they are rare they do constitute a medical concern. They are slow growing and can exert pressure on the auditory nerve causing some hearing loss. Other symptoms may include vertigo, plugged sensation in the ear, a sudden decrease in hearing, tinnitus or noises in one ear, and recurring headaches.

Cerebrovascular changes – loss of blood flow to the brain whether over time or suddenly (a stroke) can cause a decrease in speech recognition. –Tinnitus – Or ringing in the ear created in the ear without outside stimulus.

Vertigo – a spinning sensation within the head.

What are signs of hearing loss?

Difficulty hearing in crowded rooms, asking for people to repeat what they say, difficulty on the telephone, perceiving that everyone mumbles, loud volume on the television or stereo, limited recognition of what is said, giving incorrect responses in conversation, etc. are all signs of hearing loss.